The Barbecue season is fast approaching and don’t you just love a slice of perfectly seasoned and seared steak? But is it that simple to cook it, too?

Yes. It is not necessarily difficult to cook steak. But if it is not turning out as well as you expected it to, there might be certain mistakes that you are making.

Let’s have a look at some of the most common mistakes which people tend to make while cooking their steak and how can they avoid it.

1. Cooking it straight from the fridge

Do not put your steak for cooking while it’s still cold. Take out the steak from the fridge at least an hour before you cook it, to get a more even cooking process. Let the steak come to room temperature before cooking. Although there is an exception to this rule. If your stick is a thin cut, you must start cooking it cold as it gives the steak a buffer from getting overcooked in the center.

Some chefs say that the actual process of cooking steak starts many hours before the steak is even put on heat. Seasoning the steak a few hours before cooking it is extremely important. If the steak is thick cut, even more so. Some people season only one side of the steak. But according to a popular chef, seasoning on both sides and in enough quantity is important to bring out its taste. You can use kosher salt, sea salt as well as different types of pepper mixes for the seasoning process.

3. Relying on the oven alone

Don’t cook your steak in the oven! The perfect steak can be cooked using a grill or pan. You don’t even need to use your oven for it. Season it well with salt and pepper, and it’s good to go! Although if your steak has a thick cut, you can turn to your oven as well. In this case too, top chefs recommend grilling it first before the temperature reaches the middle of the steak, and then finishing it off using the oven. 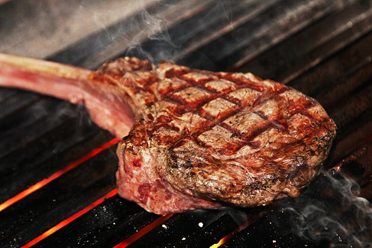 4. Not checking if the pan or grill is hot enough

If you prefer cooking steak on the stove with a pan or a grill, you need to make sure that your pan is hot enough before placing the steak on it. This is the most common mistake that people make while cooking their steak. If you don’t use a scorching hot pan, you will end up steaming your steak and you’ll be left with a gray piece of meat without any juices and crust.  Using a very hot pan will ensure that you get delicious crust on your steak. A very hot pan or a cast iron or carbon steel skillet will help you get that mouth-watering crust on the steak.

Once you put the steak in a hot pan, let it cook until it caramelizes. Post that, flip it once. Only once.  If you keep flipping every now and then, you are keeping the steak off the hot surface which defeats the purpose of searing its outside and locking its juices inside.

7. Leaving the steak on an open flame for too long

When you grill the steak, you must sear it and move it to the side so that it doesn’t end up charred. Searing the meat enough to give it a good color and then moving it to the cooler part of the grill would be an ideal way to cook the steak. If you keep it on an open flame for too long, it is sure to end up charred and might even get wasted. 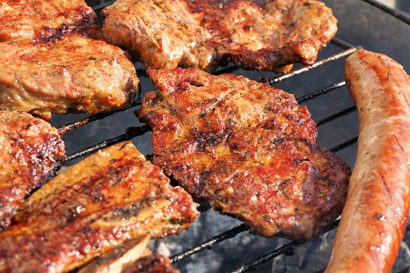 8. Pressing down the steak

After you get a good sear on your steak, avoid pressing it down. Using a pair of tongs or spatula should be avoided. Poking the steak with a fork is a complete no-no. In the process you lose all its juices and are left with a dry piece of steak. You lose the fat of the steak if you keep applying pressure on to it. Don’t squeeze or press the steak, if you wish to keep all its juices intact.  This should be kept in mind while cooking burgers as well.

9. Not letting the meat rest

Most people serve the steak as soon as they are done cooking it.  Some people slice the steak just as it comes off the heat. Both of the above steps should be avoided as it is essential that you let the steak rest enough before serving or slicing it. Resting the steak is important in order to churn out perfectly cooked and juicy steak. The resting time depends on the cut of the steak. It can range from 10 minutes to 45 minutes for larger cuts. An average of ten minutes resting period is recommended for most cuts of steak.

In the process of cooking, a lot of your pre-cooking seasoning is lost. It is important to re-season the steak just before you start serving it. A sprinkle of sea salt over the steak is done will put ample taste and flavour on it.

A popular chef shares that for a typical 12-6oz New York strip steak, he cooks it for about four minutes on either side in extremely high heat, that leaves the oil smoking. Post cooking it, he allows it to rest for about five minutes at room temperature. Once the steak is rested, although not completely cold, he puts it back on the pan to flavour it with butter, garlic and thyme. He allows the steak to cook in this butter mix on a medium to medium high heat until it reaches medium rare which is an additional three minutes on each side.

If you follow the above process and avoid all the mistakes we mentioned in the post, you will end up with a perfectly cooked and seared steak which your guests will never get enough of.